The slurry conditioning tank is used to stir the pulp before the flotation operation, so that the mineral particles are suspended and fully contacted and mixed with the medicament to create conditions for the separation operation. The mixing storage tank is used for pulp mixing and storage. It is used not only for mineral processing plants, but also for mixing black, non-ferrous metal concentrate and coal slurry that transported by pipes.

The lift conditioning tank has both agitation and lifting effect, and the lifting height is up to 1.2m. This kind of equipment can be selected when the equipment configuration causes the low elevation difference in the self flow of the pulp, or when the difference is not suitable for pumping.

The reagent conditioning tank is used in the preparation of various reagents in the floatation plant. The material and structure of the tank are different because of the different properties of the reagent.

This is a conditioning tank with recirculation drum (Figure 2). It is mainly set up before floatation operation to make the mixture fully contacted with the slurry so as to exert the action of the pesticide as far as possible. It is suitable for mixing slurry and flotation reagent with a concentration of not more than 30% and a density of ore not more than 3.5. 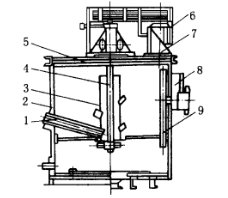 When the machine is working, under the rotation of the impeller, the slurry and the reagents produce large and small circulation movement (figure 3), so that the slurry and reagents in the whole tank can be evenly mixed, and the mixed suspension will be discharged from the overflow port. 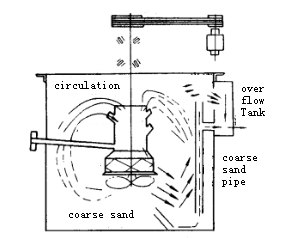 The structure of the conditioning tank without recirculation pipe is shown in Figure 1, the following features: 1) blade made of the steel plate the desired shape, and then using the model pressed into final shape, hub and blades are connected by bolts, the utility model has the advantages of good performance, easy to replace blade balance; 2) spindle from the upper and lower shaft is composed of two parts, under the shaft with seamless steel pipe, two shaft flange. This will not only reduce the quality of the equipment, and ensure a certain rigidity, and reduce the lifting height of the agitator; 3) bearings supporting the shaft is no longer used cast iron instead of the traditional welding structure, the equipment has the advantages of compact structure, reduce the quality; 4) transmission system adopts vertical planetary gear reducer, the output shaft is connected with the spindle with elastic coupling. The transmission efficiency is high, the structure is simple, the operation is reliable; 5) the proportion of the standard parts and the common parts is increased and the cost is reduced.

The working principle of the conditioning tank is shown in Figure 4. The slurry is discharged under the rotation of the axial flow propeller blade impeller, along the axial direction from the lower end of the impeller, and the negative pressure is formed in the impeller cavity, which makes the pulp flow into the impeller cavity from the impeller and replenish. At the same time, under the guidance of the steady flow plate, the pulp forms the vertical circulation flow of the center downward and upward in the trough. When the upflow velocity of the pulp is greater than the sedimentation rate of the ore particles, the ore particles in the pulp will be suspended and keep the uniform concentration. 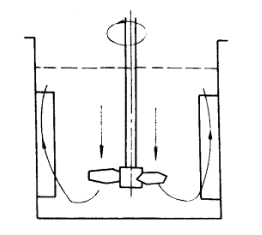 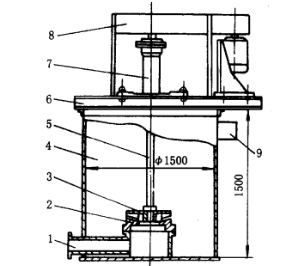 The conditioning tank can not only agitate the reagent, but also store the reagent, and is equipped with a system for supplying water to the agitating tank. The reagent delivery device can transport the stored reagent slurry outwards, and the electric valve is used to control the discharge of the reagent slurry between the mixing tank and the storage tank. This conditioning tank can be used for the preparation of various reagents.

2.The impeller is above the ore pulp sedimentation zone, which is light for starting, so it has a small starting power in order to relieve operators’ labor intensity in  a large extend.

5.The relevant location between feeding, discharge and the electrical machine can be arranged differently according to users’ requirements.

When the impeller moves in the clockwise direction (seeing from the top to down), one zone of negative pressure generates underneath the blade. The ore pulp, medicament and air which are delivered by the feeding pipe are simultaneously absorbed and move downward, they are blended fully by the impeller and then are pushed outside by the blade, which flows upward along with the external wall of cycling pump. Since new ore pulp is fed in constantly, and the qualified ore pulp through stirring and blending comes out from the mine mouth constantly, and the stirring and blending operation is done.